Regardless of your dart experience level, it’s always fun to learn a new dart game that tests your skills and sometimes even luck.

This article will give an overview of some of the most popular dart board games invented.

After you’ve decided on a starting score, each player or team gets one turn each round. For each round, a player or team throws three darts. To determine who throws first, each player will throw one dart to see who can land a bullseye, or who is closest to the center of the dartboard. Whoever is closest will throw first in the first game and the other player will throw first in the second game. They will alternate, regardless who wins or loses.

To begin a player’s score, they must first “double in,” which means they need to hit any number on the thin outer ring of the dartboard and double the score of that segment. Hitting the inner or a double bull will also be counted as a double in. Once a double is thrown, then your score from subsequent darts thrown will be subtracted from the starting score.

The object of cricket is to be the first player is to open or close all of the cricket numbers on the board and have the highest or equal number of points as his or her opponent(s). Cricket is typically played with two-four individual players or two teams. The cricket numbers on the board are from 15-20 and the bullseye. To determine who shoots first, each player will throw a dart and see who gets a bullseye or the closest to it. After the starter is determined, each player will throw three darts per turn.

To open one of the numbers for scoring, a player must hit the number three times. Once a number is opened, players can score by hitting the number and receiving the same amount of points (for example, hitting an open 15 will give you 15 points per hit). The inner bullseye is worth 50 points and the outer bullseye ring is worth 25. However, once a player hits an open number three times, it closes and is removed from play. To keep track of the numbers that each player has closed or opened, it’s important to use a score board. In order to win, a player must have opened or closed all cricket numbers and have a score that is equal or greater than their opponents score. 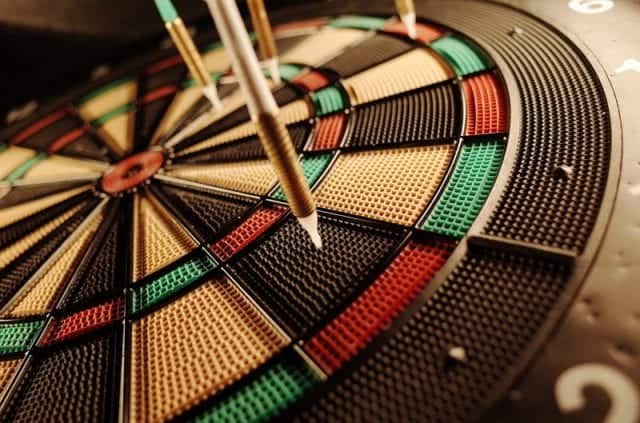 Around the world is a popular dart board game that’s typically played with two individuals. The object of the game is to be the first player that hits every number on the board in order from 1-20. Each player throws three darts per turn. Hitting any part of the number counts, although there are versions that are played with only the doubles or triples of the dartboard. Some versions also include the bullseye to make it even more challenging to win the game. However, in its most basic version, the first player to hit numbers 1-20 consecutively wins the game.

Killer is considered one of the most popular dart board games for larger groups. Three or more players are recommended for the game to ensure that it’s fun for everyone. Each player will claim a different number on the board, which will be determined by their first throw. To start the game, each player will take a turn throwing a dart with their non-dominant hand. The number each player hits will become their number for the game. Each player is also allocated a certain number of lives (usually 3 or 5).

Next, a killer needs to be determined. To become a killer each player must hit the double of their own number. Once you’ve hit your own double, you can begin taking lives away from your opponents. Each time you hit the doubles of your opponents’ numbers, you take away a life from them. However, if you hit your own double then you lose one of your own lives. The game continues until only one player has lives left.

Shanghai can be played with two or more players, and also works well in teams. Each round of the game corresponds to the consecutive numbers on the board (1-20). For round 1, the only segment that players can score in is the 1 segment, and score a maximum of 3 points if all three darts hit the segment. For round 7, players can score a maximum of 21 points by hitting the 7 segment three times in one turn. Some Shanghai games will only last 7 rounds, while some will go up to 20. The object of the game is to have the highest score by the end of the game or by shooting a “shanghai” to win instantly. A shanghai is when a player hits the single, double and triple of the number currently in play. By doing so, a player can end the game and win immediately.