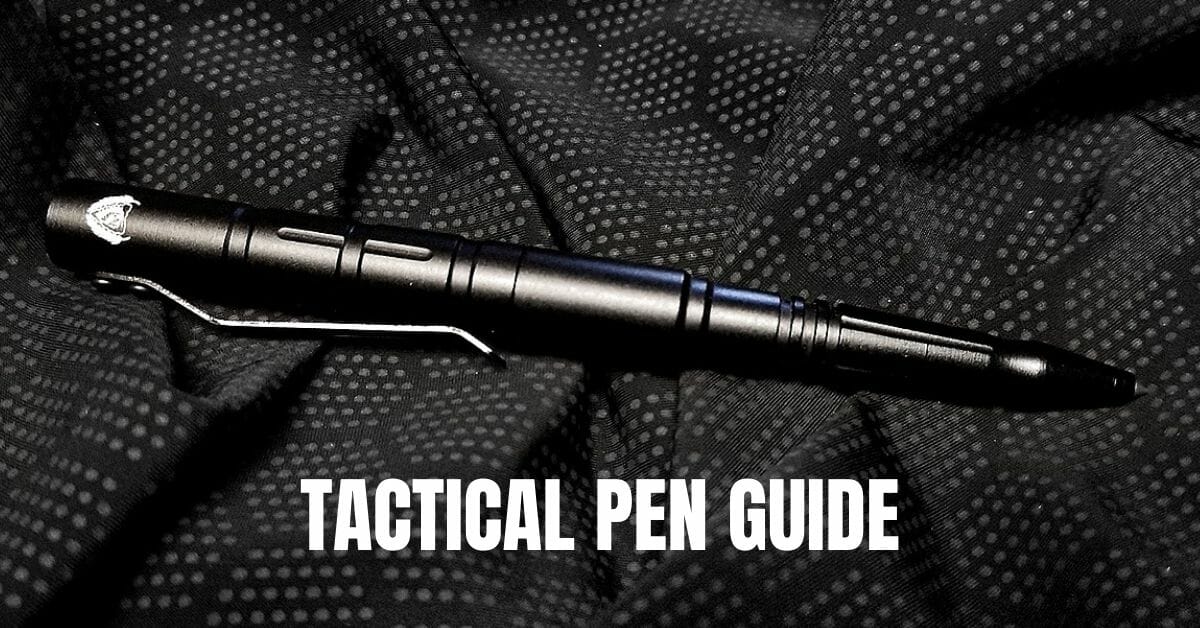 Our everyday life is unpredictable that you’ll never know that we are already facing an accident or a conflict. Those situations arise at most unexpected times, especially that we are not always prepared. At some point, it will be helpful to have an object that you can use as a weapon to defend yourself.

Getting a tactical pen for self-defense is a smart way to increase your level of defense. It is small and concealed but it can give you the advantage when your life is in a dangerous situation.

What Are Tactical Pens

A tactical pen is a heavy-duty pen that is made for writing and self-defense. It was made to jot down your ideas and grocery list but it can also be used to fend off your attacker. It is also used by people who don’t want to use or carry a gun or a knife for self-defense because tactical pens don’t appear as a weapon and at the same time they can be concealed.

Tactical pens typically have a heavy-duty metal construction and it’s an essential part of EDC or “Everyday carry” tool. Tactical pens embody the principle of EDC for their portability, versatility, and utility because they can easily fit any pocket or shirt while providing you protection as a tool for self-defense. It’s designed to incapacitate, penetrate and injure an assailant.

Why Do We Need The Tactical Pens?

It is not common for humans to seek violence but, those things happen and usually, it does when we are not prepared, just like accidents. You’ll never who awaits around the corner. It can be a criminal or someone who is in search of drugs, money, and possession, or maybe a gang member who can mistakenly assault someone on their way.

That’s why people are learning skills in martial arts, weapons, and self-defense tools to ward off potential attackers.

Martial arts skills can teach you primarily how to defend yourself and attack but it also teaches you the discipline to avoid conflicts as much as possible. Martial arts skill in itself is good enough but combined with an efficient weapon such as a tactical pen will provide you more advantage in a fight to save your life.

The advantage of using a tactical pen for self-defense compared to other weapons is that it can be concealed and it doesn’t look like a weapon. It looks like its purpose is primarily a writing instrument but, it is an effective weapon for self-defense because is light, easy to hold, and very durable.

You don’t need to be a master in martial arts to use a tactical pen. It can be used by an untrained individual and can still cause damage. But, when it is used by a “trained” individual, it becomes a dangerous and deadly weapon.

How To Use A Tactical Pen

A tactical pen can be used as:

Technically, your tactical pen is a writing instrument. You can use it to jot down your ideas, notes, what to do, and things that you need to buy on your way to the grocery store. Most tactical pens are refillable with ink cartridges so that your ink never runs out and you can continue writing.

Tactical pens are short-range weapons that can be used in narrow spaces such as a staircase, an elevator, or an alley where you have nowhere to run and your only chance to survive is to fight back. Aim for the most vulnerable parts of the attacker when you are forced to use your pen and it is the eyes, throat, groin, temple, wrists, and more.

To break glass and get out of restraints in emergencies

A tactical pen can be used to break glass and other fragile objects. It is made of heavy-duty steel enclosures making it useful for breaking windows if you are trapped in a room so that you can escape. You can also use it to break a glass window in the car if you are trapped inside and you can’t go out.

Also, it can be used to tear off duct tapes, textiles, or zip ties when used as restraints. The tactical pen’s pointed tip is so durable that it can puncture its way to whatever restraint that is binding you.

Keep in mind: It Is A Weapon

The primary purpose of the tactical pen is to use it for self-defense so keep in mind that it is a weapon. It is presumed that you know that it is a weapon when you purchased it. It can wound a person and in some cases could kill and you could be held responsible the same way as using a knife or a gun.

Remember that you could still be charged even if you get into a situation where you have to use your tactical pen. Be responsible and only use it for survival.

Tactical pens are purchased to be used as weapons to protect yourself from an argument if you used the tactical pen for self-defense. Here are several simple but techniques you can use when you are about to use your tactical pen.

Use forearm in X motion to deflect

The x motion with the forearm blocks punches towards your head and the tactical pen punctures the attacker’s forearm and the pain would make the attack stop. Make sure not to swing all the way through as it is harder for your forearm to retract and defend a series of attacks.

When defending with an X motion to deflect doesn’t work, grab and strike will effectively maim your attacker. After doing an X motion, grab the nearest elbow towards you and use the arm with the tactical pen to strike the easiest target area and that could be the throat or the temples.

Here’s the link to the basic technique in using your tactical pen for self-defense:

Know where to strike

Strikes in certain areas of the body are more effective than others. Always look for an opportunity to strike the EENT areas (eyes, ears, nose, and throat) or you can strike wider areas like the base of the neck, armpit, and ribs. These are the upper body targets you can strike but the lower body areas also have painful target points like the groin, the knees, and the larger area such as the thigh.

Subdue your attacker to the point where they cannot fight back or follow you. After that, run and call for help because that’s the point of self-defense, to defend yourself first and to ask for help first.

Strike first, strike hard, and strike often. Use fast and repeated strikes with much force as you can generate. Surprise your attacker that you are fighting back to keep things in your favor. There’s no time to hesitate because those seconds can make the difference between getting hurt or getting away.

Keep going until the person attacking you stops, runs away, could not go on attacking you, or is stunned. You should get to the point where your attacker leaves because they can’t subdue you and they’ll only themselves more when they do.

Where To Buy Them?

You can buy tactical pens on Amazon where you can compare their prices and specs, also you can check out ABP Tactical if you want to save and have more options to choose from. Also, check this site from Hennie Haynes as they offer a wide variety of EDC tools that you can use.

Getting a tactical pen is a good idea because it is better to have it and not need it (for now) than need it and you don’t have it. They’re durable enough to last and you can write with them for a longer time. Always remember that it is a weapon and make sure that you keep them away from kids.

Use it only for self-defense and not just for a purpose to hurt anyone. Always stay safe and away from danger as much as possible. Always keep your pen to yourself to keep you away from danger.

Continue Reading
link to What Is A Tanto Knife?

Modern-era knives are designed to be general-purpose. However, if you are looking for a sharp and powerful knife that can easily cut through tough surfaces and materials, a Tanto knife is the ideal...