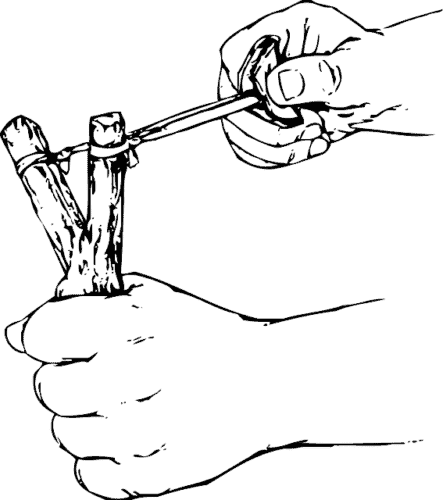 Many of us are familiar with the Biblical character David, a young shepherd boy and how he used a mere sling and a stone to kill the mighty giant Goliath, an enemy of Israel.

The sling that David used was a projectile weapon used to throw an object, such as a stone. It is often referred to as a shepherd’s sling. This type of slingshot is inexpensive, and easy to make. In ancient times, they were essential weapons in a hunter’s arsenal, while also being used in combat. Today, at certain excavation sites in Israel, and specifically in the area of Jerusalem, sling stones have been found at dig sites. It’s hard to think that this humble slingshot, which has been slightly modified, is used today to launch 21 century drones into the air.

Slingshot shooting is thrilling, and today, groups of highly skilled competitors converge to put their skills to the test. Trophies, as well as cash prizes, are awarded to the best competitors. There are slingshot forums which keep slingshot enthusiasts up to date with tournaments and events.

Hunting was the Main Purpose of a Slingshot

Ancient hand slings were made up of a single strip of leather with a central pocket or pouch for the stone. The longer the sling, the greater its range, and the long-range slings of that day were about 3 feet long. It is interesting to note that this simple, ancient “shepherd’s weapon” is still in use in some areas today.

Slinging is still practiced by Peruvian people who use it as the simple weapon it is, however, with just minor variations in form. These slingshots are capable of killing small game from about 30 feet away. Not all these slingshots are the same, as some will have longer forks, while some forks will be wider–you just have to adjust your grip based on the form of your slingshot.

A Quiet, Lethal Weapon for Protection

Today,even gangsters will use a slingshot as a survival weapon. They are small in size and can be easily concealed. Ammunition is easily available off the streets, and gangsters appreciate being able to stealthily take down, or injure a person without alerting anyone around.

Today, it is still a valuable survival weapon which leads us to the question, “How do you use a slingshot made from wood, metal or plastic?”

Certainly, while slingshots can be loads of fun, allowing you to practice your bow-hunting skills, knowing how to use it properly will avoid injuries to you and to others. Look at your slingshot as a weapon and with practice, you’ll soon be known as a superb marksman.

There are many slingshot brands and many types of slingshots. When we mention slingshots here, we’re talking about the rubber band type. Different types of slingshots can be bought, but we’re referring to the typical “Y” shaped slingshot that use a rubber band. Many are used to practice with and some are used in competitions. You’ll need to do research if you want to invest in the best one to pursue this as a hobby.

Let’s Look at How to Use a Slingshot:

Pull the ammunition and pouch back with your free hand and pull till the band is completely extended or stretched out. Release the band after you’ve double checked that no person or animal is in the way of the stone. Once you’ve released the ammo, it will go hurtling towards the target.

The best part about knowing how to use a slingshot is that it is a shooting sport that anyone of any kind of budget can participate in. When it comes to the correct way to use your slingshot, there are plenty of tips available–detailed information about the different slingshots you get, how to shoot, the bands, the type of ammo to use, ammunition loading, and even how to make your very own slingshot.

When learning how to use a slingshot, practice is key, and you have to keep going at it if you want to improve your skills and make your shooting a comfortable, relaxed experience. Who knows, like David the humble shepherd boy, you might need that awesome experience that comes from practice to bring down a threat you might have to face.