How can a Bow String affect your Archery Experience?

How often Should You Change Your Bow String?

How Do You Choose the Best Compound Bow String?

The usual materials of bow strings

452X– It is a well- known bow string that has been on the market for a long time. This bowstring is prone to fuzzing and requires a lot of waxing over time. But these 2 factors I can overlook because this brand of bowstring has been around for a long time and is in widespread use. Itâ€™s made of blended materials which include Dyneema and Vectran. This particular bow string shoots as fast as other bowstrings on compound bows with wide wheel tracks but on compound bows with narrow wheel tracks this type of bowstring has had less than ideal effects on these bows.

8190- Requires sporadic waxing and I found out this specific bowstring lasts a very long time on bows and never needed to be changed after thousands of shots. This bowstring is very durable and wasnâ€™t influenced by extreme temperatures ranging from 10-80 degrees. It has more durability and better speed than 452X but 452X has better stability. Itâ€™s made of 100% Dyneema.

BCY-Also made of 100% Dyneema works well on compound and recurve bows. It doesnâ€™t fuzz easily and it has very good arrow speed and it also has a low creep effect on the bowstring. I saw on one website that it has the performance level of both 8190 and 452 combined which tells me this is a very good quality bowstring.

Ultra-Cam- It is made of 56% Vectran and 44% HMPE and is known to have one of the lowest creep effects of some of the bowstrings currently on the market. It is a proven product and shoots very well in hot weather. It has been used by numerous pros through the years and has a very good reputation among bow users.

How does the materials affect the shooting performance?

Arrow Speeds – Bowstrings that are made out of a Vectran blend have slowed down arrow speeds slightly compared to bowstrings made of 100% Dyneema which increase the fps of arrows in flight. So here I can definitely see that the materials that bowstrings are made of will affect the speed of the arrow in flight. So if you want faster arrow speed your best bet is to buy bowstrings made of Dyneema.You want to overlook a slightly slower arrow speed than Vectran blend bowstrings are for you. Depending on what my greater concern was less creep factor or increased arrow speed versus increased arrow speed and greater creep factor, I know would definitely dictate what type of bowstring I would buy.

Creep – â€œCreepâ€ is the elongation of the bow string. In other words it stretches the bow string out and this condition cannot be reversed. Creep throws the bow out of tune and definitely influences the shooting ability of the user. The bow will get out of tune and it will not shoot with the same precision it did when it was first tuned. The string settles into the cam and all the strands on the bowstring start performing equally causing the string to â€œcreepâ€. Creep causes the peep to rotate and it can increase or decrease both draw length and draw weight. You can overcome creep by purchasing products that have a low creep effect on bow strings or will not creep bowstrings at all.

There are a few ways to discover the length of a bow string. The most direct way is to check the manufacturerâ€™s specifications when you originally buy the bow. You can also take the string off the bow and measure it from tip to tip. Another way is to measure the string from axle to axle.

Making Your Own Compound Bow Strings

You can either buy a string jig from most archery stores or build your own for a lot less money. To build your own you will need some scrap wood, a couple cut off 1/2â€ bolts about 10â€ in length. This method will cost you a couple of bucks. Take a 2×6 piece of wood and cut two holes to fit the cut off bolts into. Insert the bolts into the wood and tighten the bottom of the bolts with 2 counter sinks on the bottom. 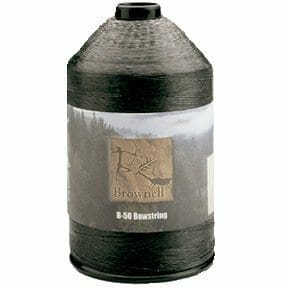 Now we can make the actual bow string. Get a Cavalier serving jig for a few bucks at any archery store. You will need to purchase some string supplies as well. I read that this particular bow string maker uses Brownell Dacron B50Â for the main part of the string and Brownell 0.026â€ diamondback braidÂ for the end servings.

The video below shows you how to make a your own bow string. Alternatively, carry on reading and we are going explain how to make one.

Tie a short loop to the end of your string and clamp it temporarily to one of the pegs. Put 20 wraps around the pegs making them taut but not tight. Tie the end of the string in the loop you tied earlier again pulling it taut but not tight. Next serve 5â€ of half the strands in the exact center of the pegs. I would use a couple pieces of scrap wood to spread the strings here. This allows enough clearance for the serving jig to be used. Use diamondback braid for this part. 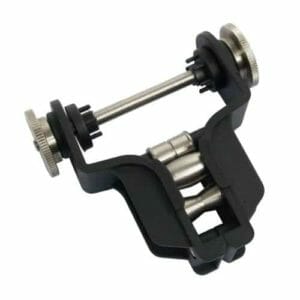 Rotate the string until the servings are centered on the peg and mark the other serving location with tape. Rotate it again so you can serve it when the end is in the middle of the peg. Lastly rotate it again so the served ends are centered on the pegs. Now we can finish the end servings. Position the unfinished end serving so that the free end is Â¼â€ shorter than the other side. Pinch the strings together and finish serving the first end allow yourself 4â€-5â€ inches of serving for this task. Pinch the other end together and serve that.

Serve 6â€ in the center you can use diamond braid for this like you used on the loops. You can use Dacron cord tying on an additional layer (using the same type of Dacron Cord you would use to binding the prod to the tiller) you can then use an alternating half hitch. The advantage of using Dacron is anyone can replace the Dacron without a specialized tool and it can be done while the string is still on the crossbow.

Finally rub plenty of beeswax (if you can find it) on the string. An alternate source would be Silicone Bow String wax which doesnâ€™t smell but it doesnâ€™t work as well either. 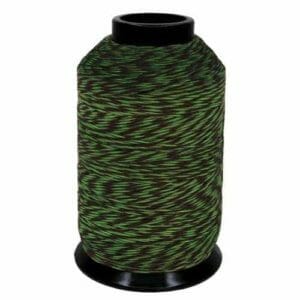 I recommend purchasing BCY 452 Bow String materialÂ and the BCY Bear Paw Serving tool. These products will greatly aid you in this project. The BCY 452 Bow String material can be bought on Amazon and it has no creep effect and has excellent arrow speed. The BCY Bear Paw serving tool can also be purchased on Amazon. They are very good prices for products that have been proven to be reliable.

I really think the Brownell Sport Pro B50 bow string is a very good value for money. Many other reviewers shared my opinion as they gave it a 4.9 out of 5.0 rating. One thing I really liked about the bow string was that it came pre-waxed. So I wonâ€™t have to go out and buy wax for my bow string which saves me time and money. I donâ€™t have to apply the wax to the string either since it already has the wax applied to it. 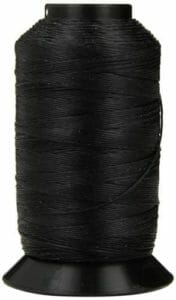 The product arrived quickly and the product was packed securely and all the necessary parts were there. The bow string also worked well for me once I got it unpacked and started using it. Brownell gets a five star rating on this one because they delivered it fast and the product works great. Both claims were supported in their advertising. Another factor that influenced my decision to buy it was a review I read about it. One customer bought it and used it to help his Boy Scout troop earn their badges. The whole event went well. This carried a lot of weight in my decision to buy this product.

There was one customer who had a bad experience with Brownellâ€™s bow string. He bought some red spool and twisted the red with many other colored spools. The red bled into the multi-colored bow strings. He pointed this out Brownell who at first seemed to ignore his request. They sent his defective bow string material back to him. They gave no explanation for the bleeding. He published his review and Brownell promptly sent him a new spool of red bow string material. This didnâ€™t deter my decision to try Brownellâ€™s bow string material. Yes they were late on responding to this customer but they did solve the problem. >>>Click here to see the latest deal on Amazon<<<